The Christmas Party at the Runnymede Hotel came and went with the Club taking two tables of guests. With the boys all wearing dinner suits and the girls suitably attired in sparkly outfits, it seemed to kick-start Christmas in style. We were particularly pleased to see that Sylvie was able to come although she confessed that it did take her around 4 hours to find the Hotel, let’s hope she thought it was worth it. The party format was as normal with a drinks reception followed by the three course meal which most of us seemed to enjoy. Wines were served by the waiters and the party music started after the meal, a bit loud for some but the dance floor quickly filled to capacity. 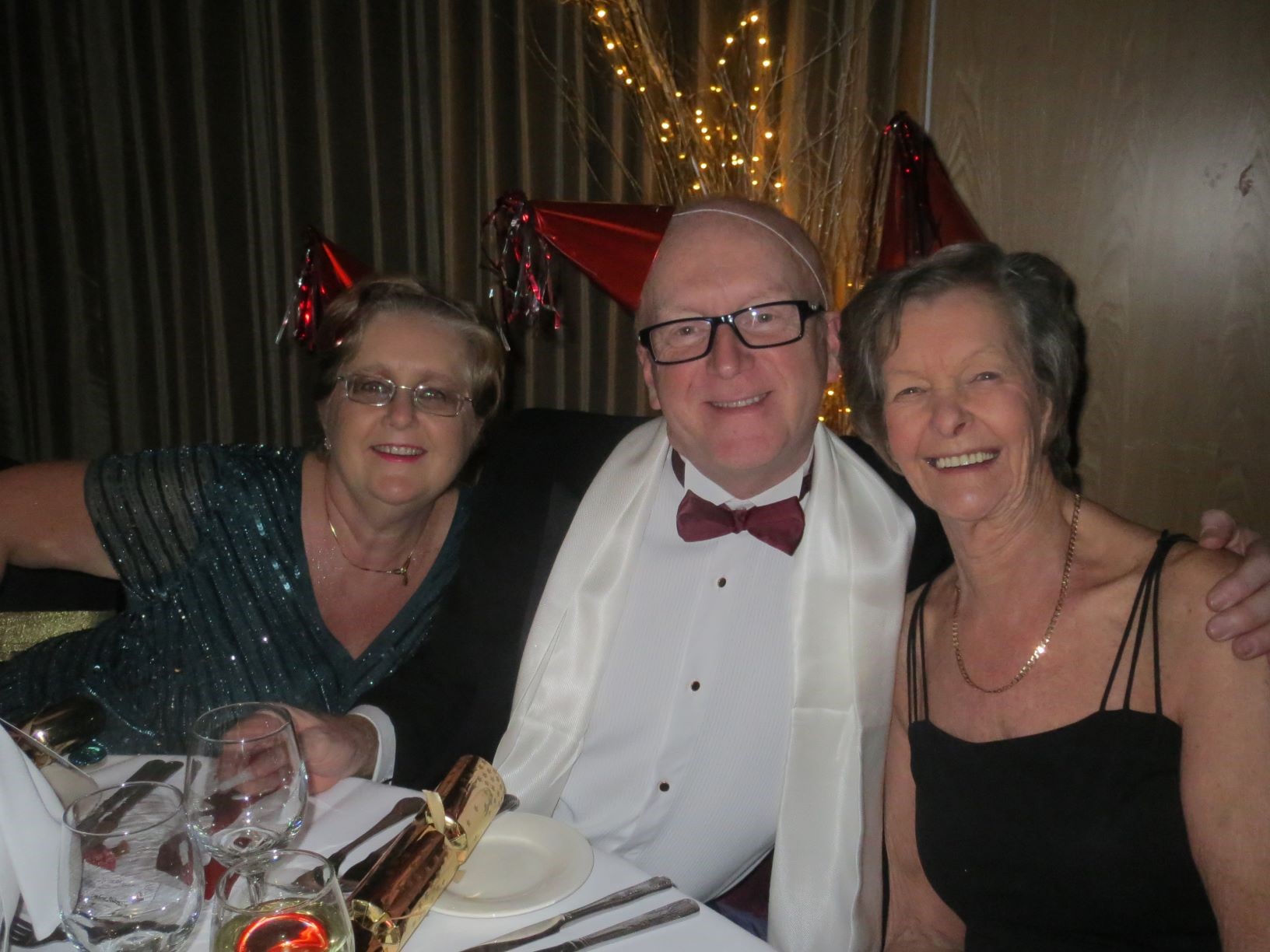 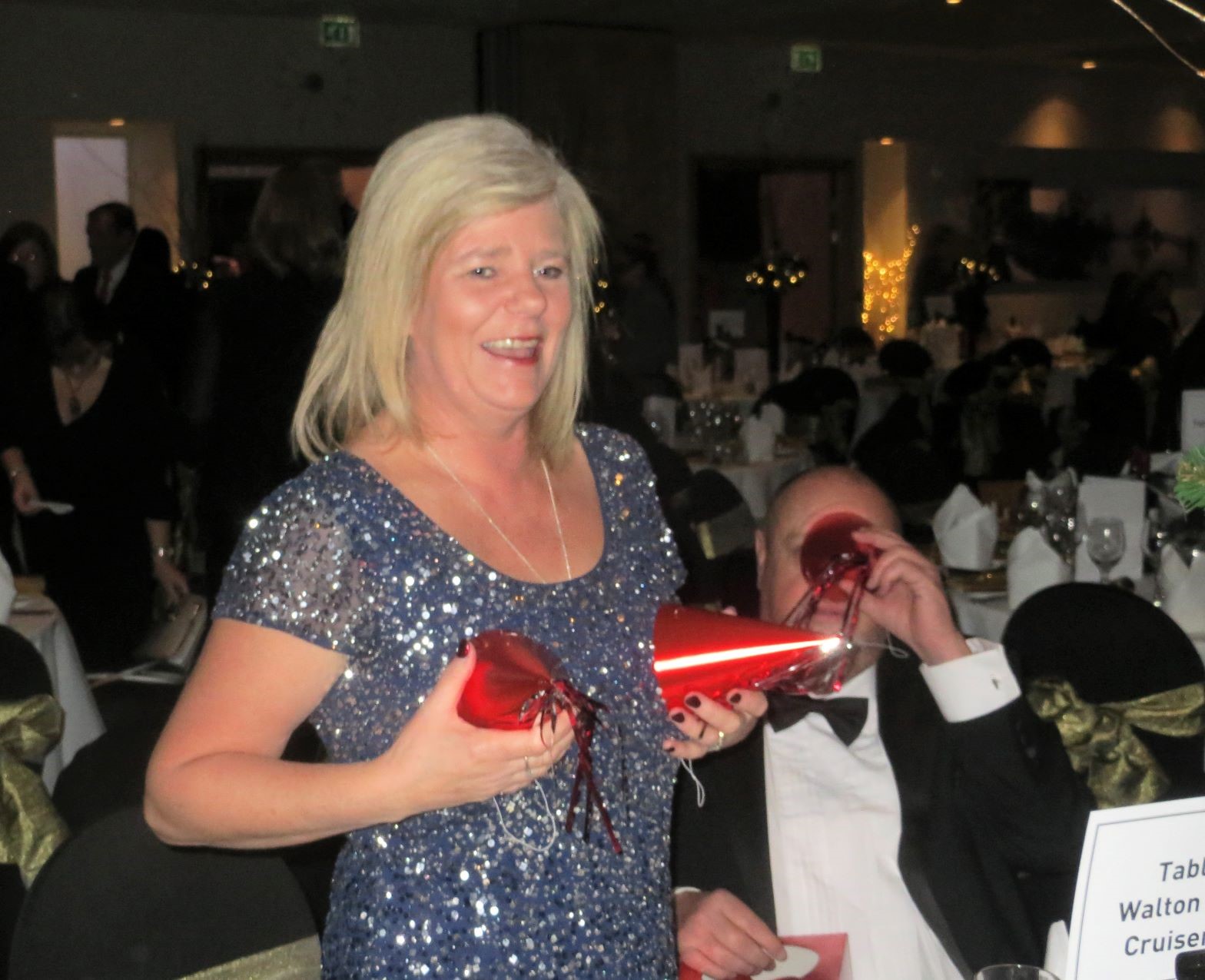 Sandy gets to wear two hats at the same time 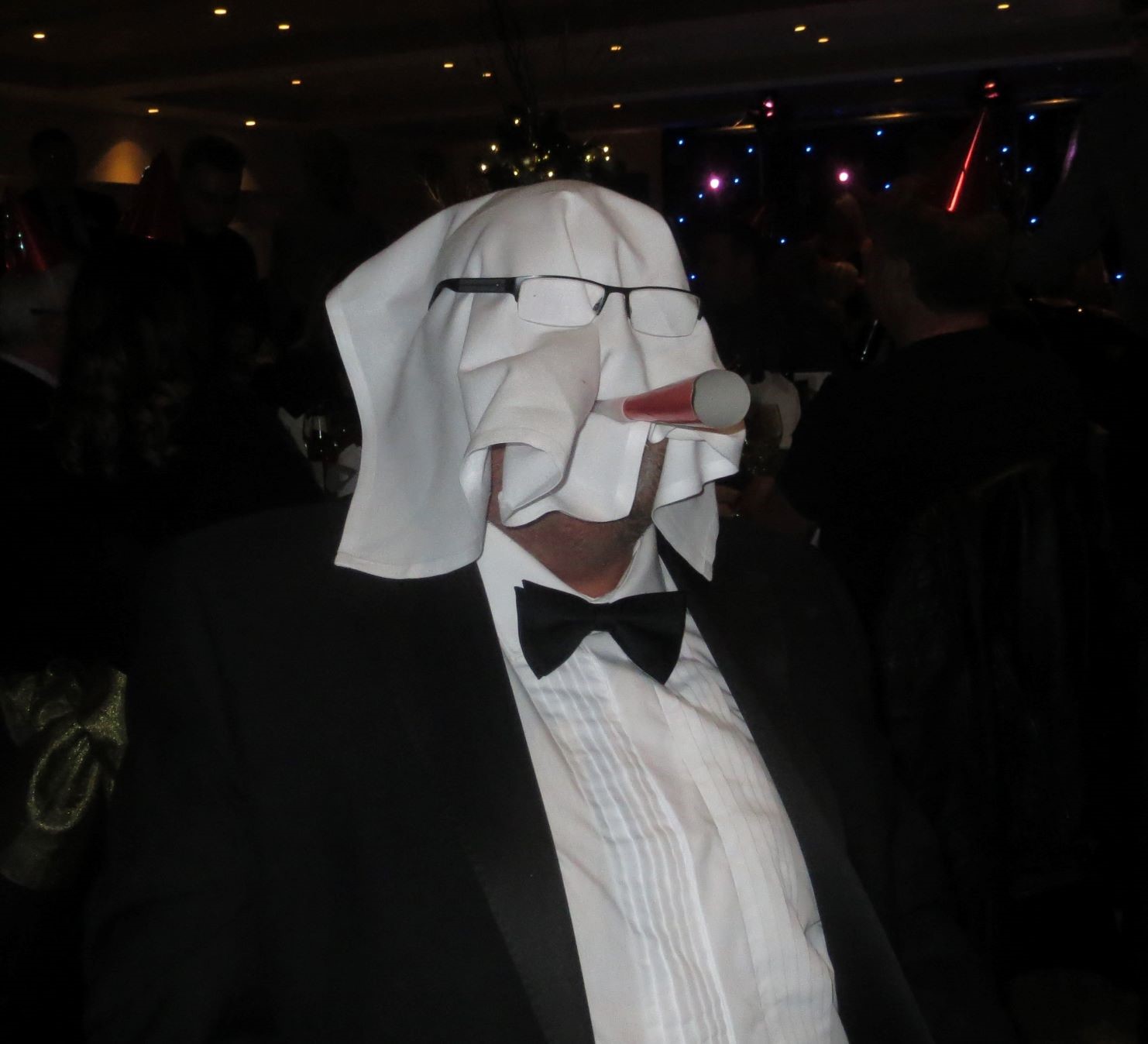 Isle of Wight Weekend Away 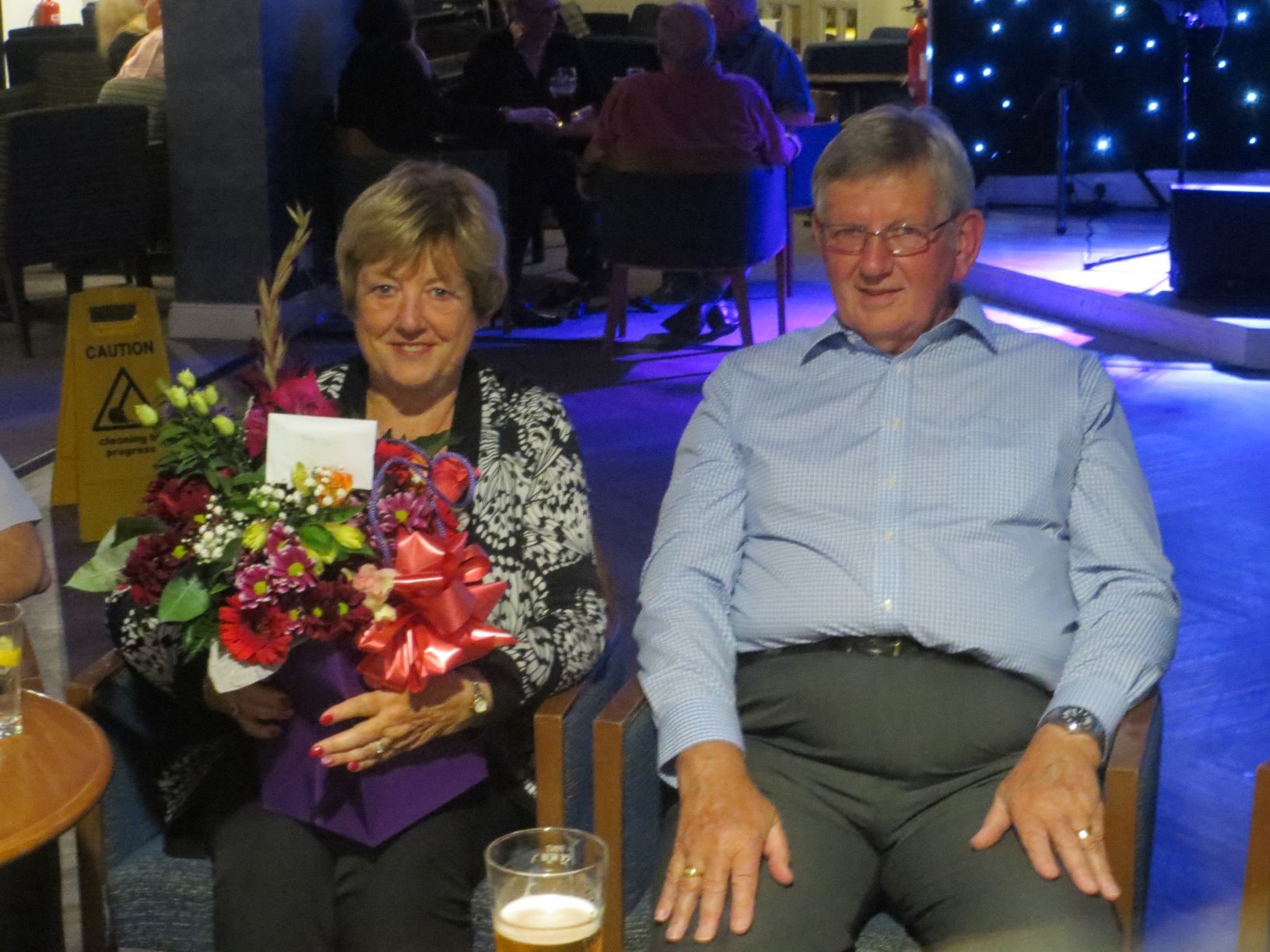 With winter on its way there is less boating activity to report on but there are several land based activities in the club calendar to get involved with. One such event was the recent trip to the Isle of Wight organised superbly by Sue, with a little help from Alan, where 18 members took their cars across on the ferry from Portsmouth to Fishbourne heading for the Warners Holiday Resort in Bembridge. 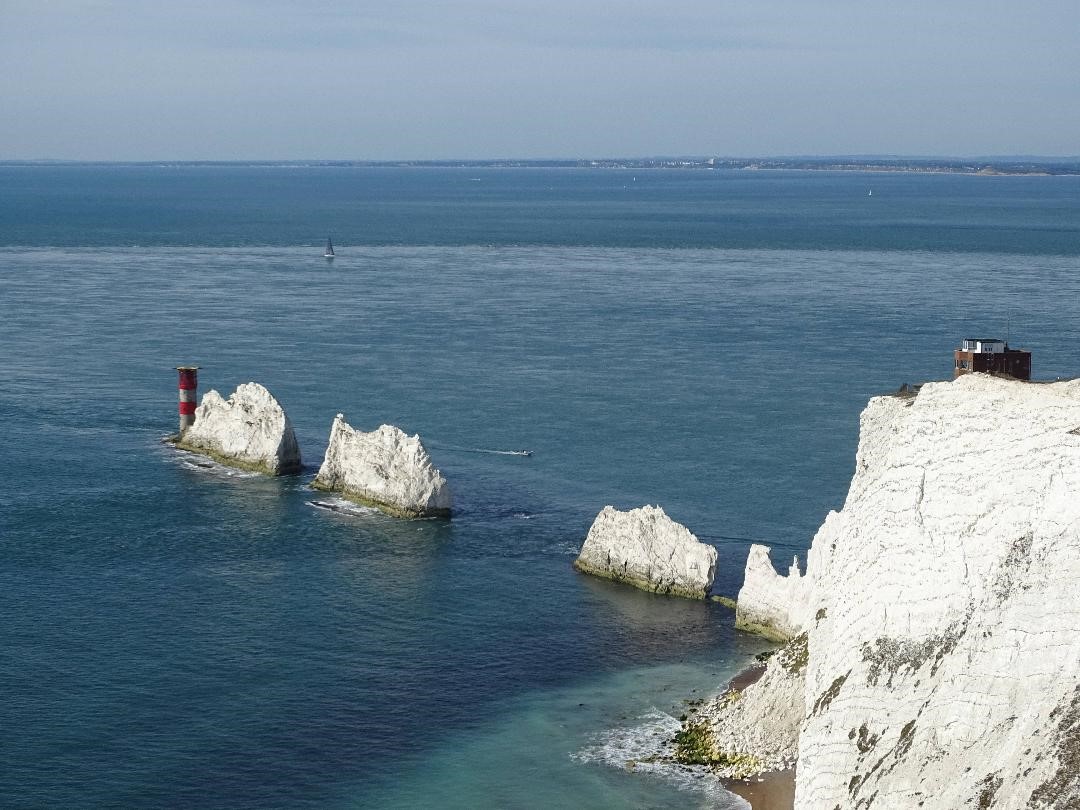 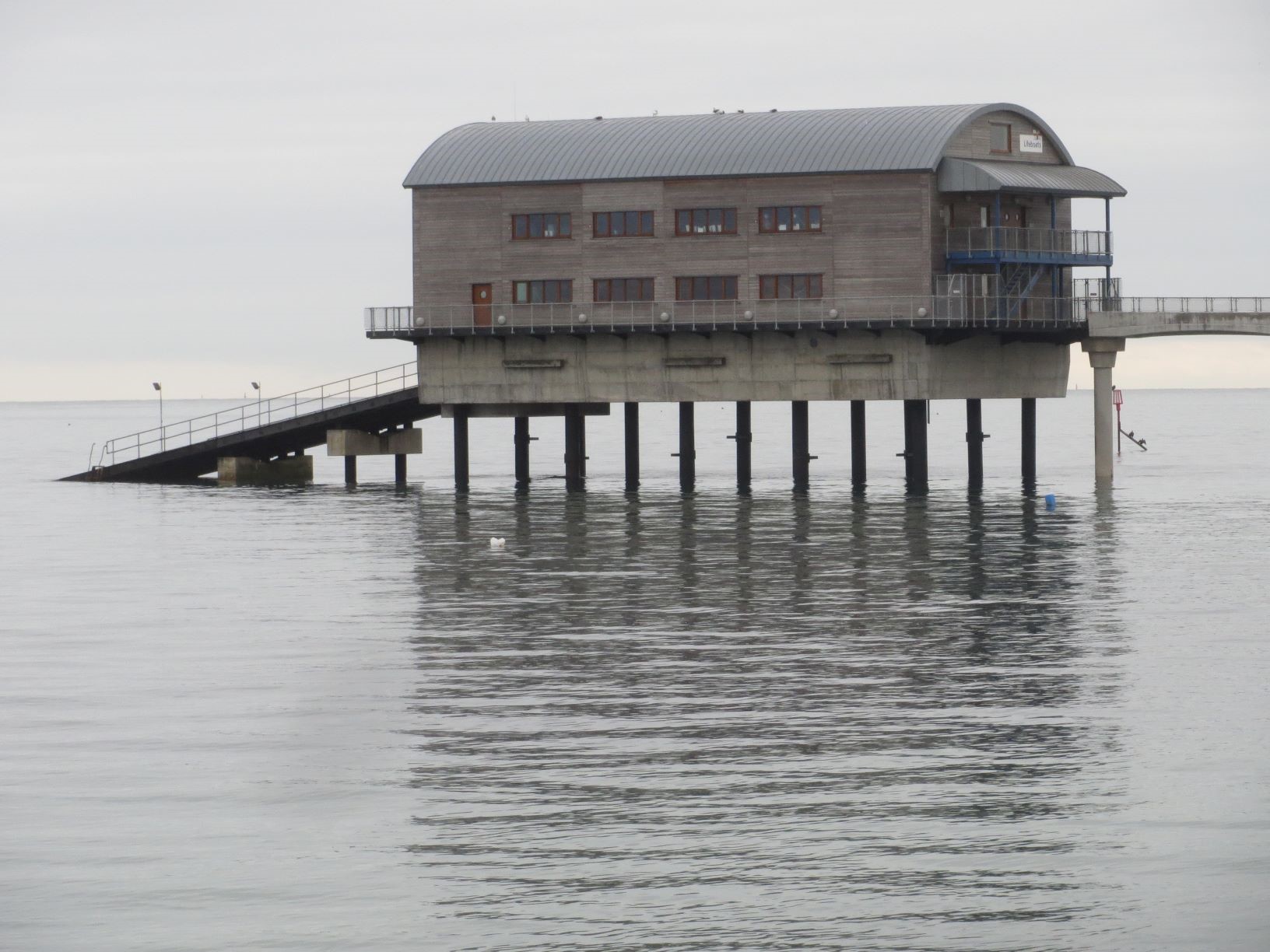 With half board accommodation provided, we chose from a comprehensive buffet breakfast and were presented with a wide choice of mains and puds in the evening with either table service or a help yourself buffet available. The rooms were comfortable with many having a sea view and although there were a couple of hiccups Sue managed to sort them out without any fuss. The entertainment team worked hard to provide daily activities and they also put together some credible shows in the evening.

It helped a lot that we had allocated tables both in the restaurant and the evening theatre venue as it meant we didn’t have to scrabble to sit together and everyone got to chat to different club members at mealtimes. During the day we had lots of free time available which many club members used to visit various attractions around the Island the most popular one being a visit to Osbourne House, the former residence of Queen Victoria and her husband Prince Albert with their nine children. Victoria spent much of her time there and it was at Osbourne House that she died in 1901. I understand that the name of the building is soon to be officially changed to “Royal Osbourne”.

As a point of interest, the visiting US navy ship was the Harry S Truman, the 2nd largest nuclear powered aircraft carrier in the world, large enough to have two cruise ships placed on its deck and still have room for aircraft to take off between them. 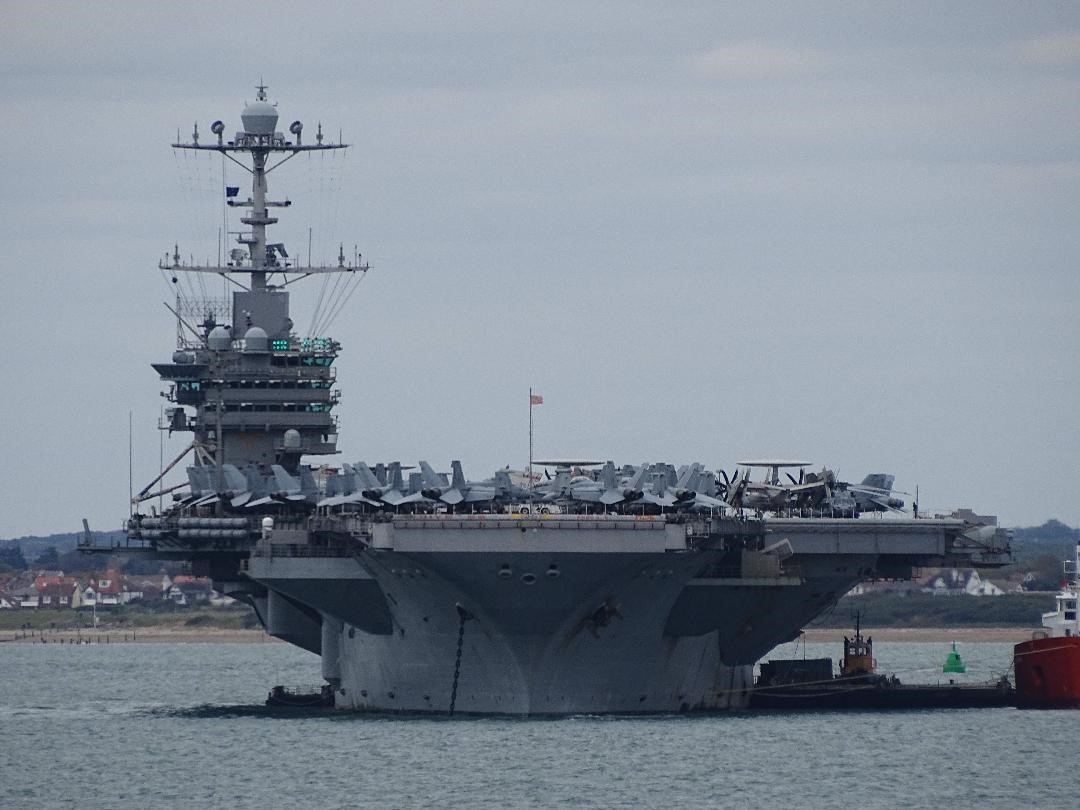 Overall it was an excellent weekend and the Club showed its thanks and appreciation to Sue for organising the event by presenting her with a bouquet of flowers in the bar on our last evening. We did raise a glass or two to absent friends that couldn’t make it, you know who you are! 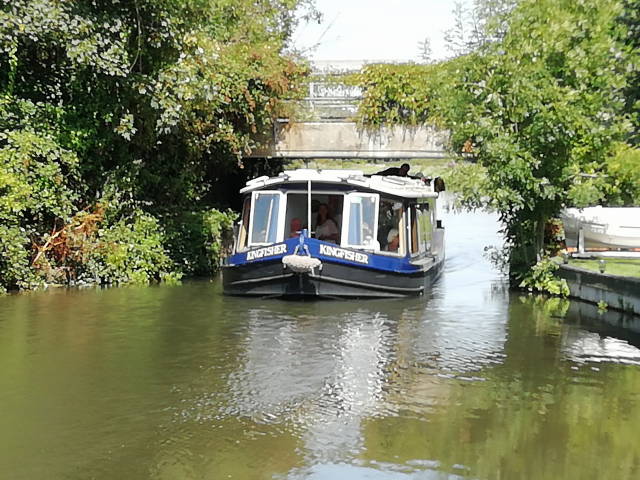 For those of us that went on the day trip to the Chichester Canal I can only say it was one of those events where everything seemed to drop into place perfectly resulting in a fantastic day out. Everybody met up at the Canal Basin to grab a coffee at the delightful café before we embarked the 42ft barge to receive a safety briefing from skipper Alan. The 80 minute boat trip was leisurely and interesting taking in most of the navigable length of the canal and small groups of us were allowed to stand in the cockpit, except when passing under the very low bridges. 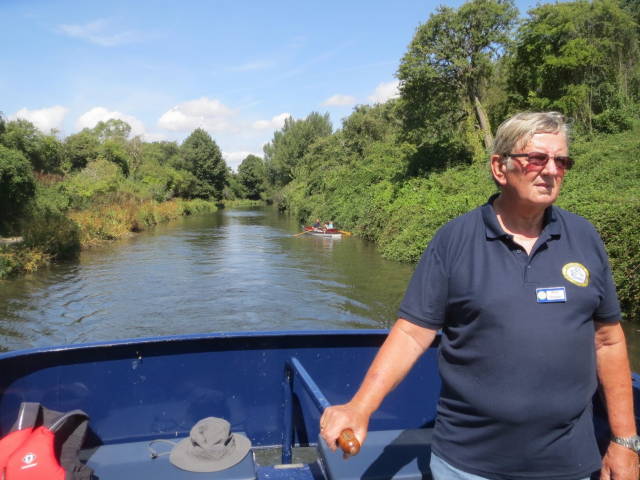 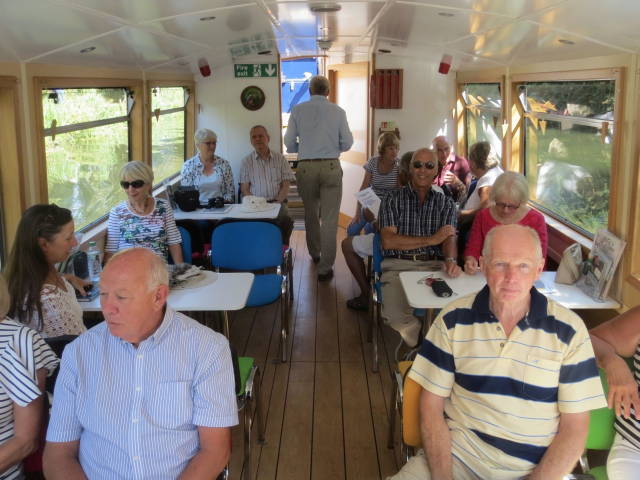 Back at the Basin we all piled into our cars and headed off to Alan and Sues house for “lunch”. Lunch turned out to be a feast that was as good to look at as it was to eat. With tables and chairs laid out in the afternoon sunshine it was a garden party par excellence with dishes for all tastes prepared by the host and hostess with every type of drink available. Following the food the energetic amongst us took the opportunity to go for a walk along the local beach, and all the time the sun was shining, it really couldn’t get any better. On behalf of all of us that went and enjoyed the day, I must say a huge THANK YOU to Alan and Sue for their hard work and hospitality for organising and making this a Club event that will be remembered for a long time. 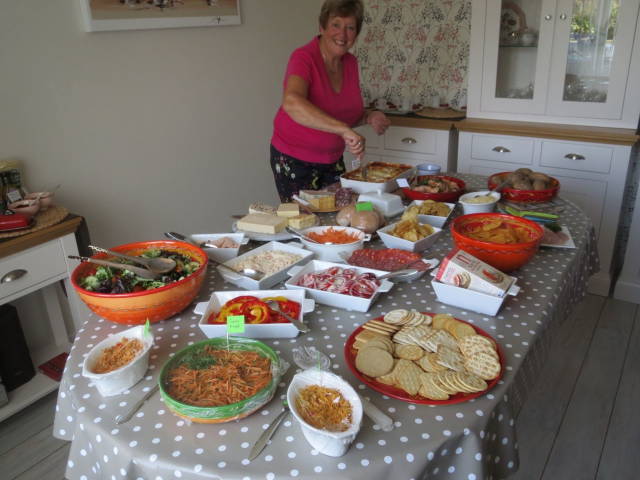 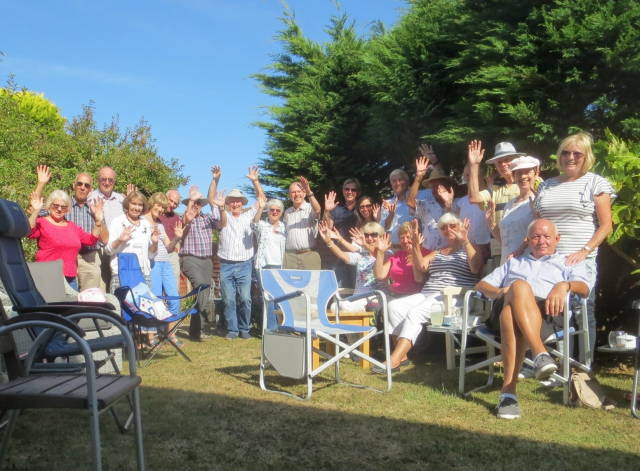 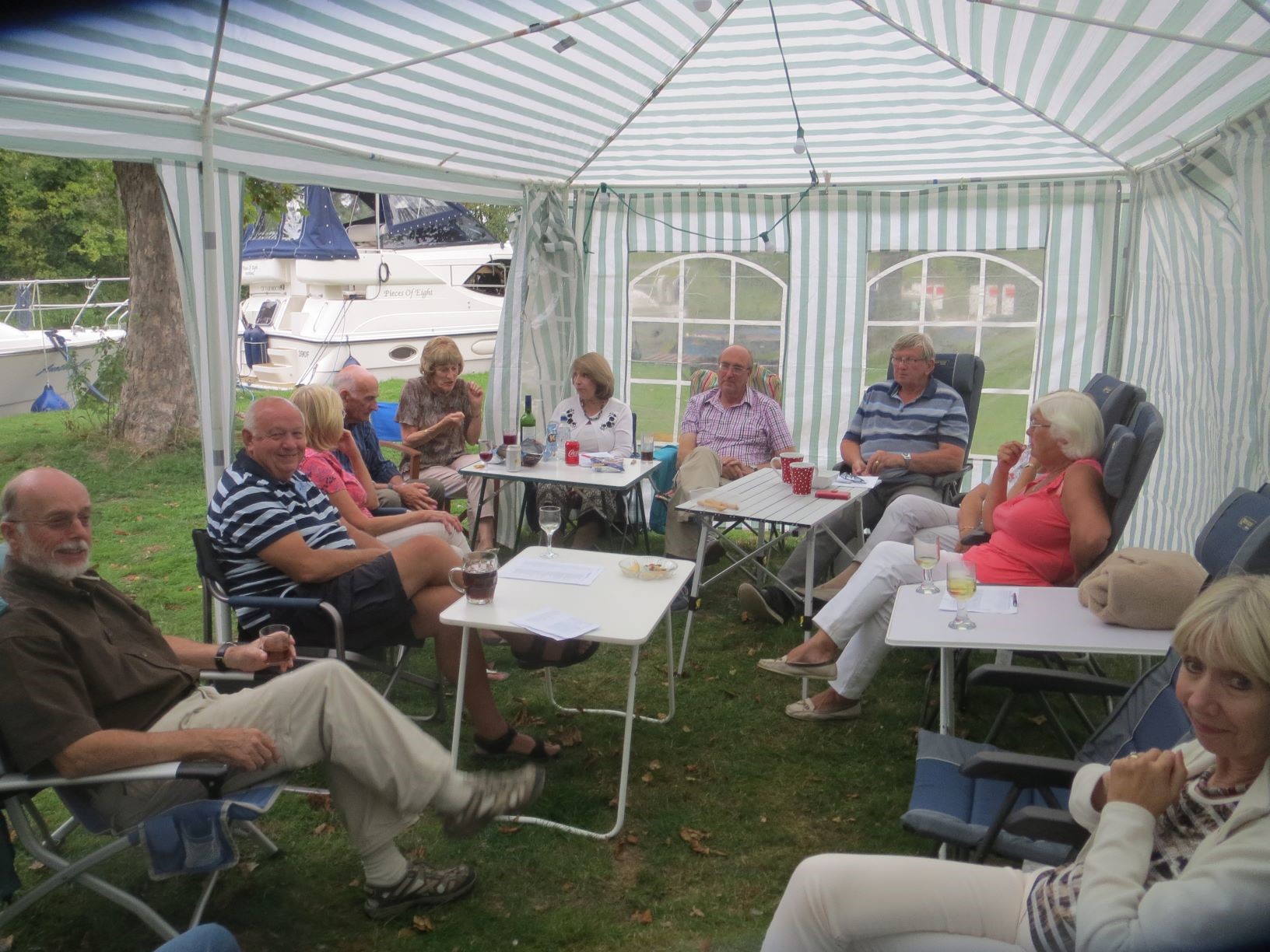 The Abingdon Rally was blessed with decent boating weather with no rain and normal summer temperatures, not the blistering heat of the earlier weeks. This year the club rally was put back a week to avoid the bank holiday rush and travelled further than the normal meeting points of Henley or Hurley. The deferred start proved to be very beneficial as we experienced no queues at any of the locks making the trip more enjoyable (we waited 2 hours at Temple lock last year) but on the other hand the longer run to Abingdon prevented some crews going due to the time commitment involved. This is a consideration when we plan next years itinerary.

As Pastiche had not yet been past Goring we had planned to stop at Wallingford on route to explore the town but we didn’t realise it was their Bunkfest festivities week so the moorings were rammed full, 3 abreast in places. So we continued up to Abingdon where we joined 4 other club boats for afternoon tea on the moorings just downstream of the bridge. We moved to the lock moorings on the Saturday where there was sufficient space for the 6 boats that made the trip with Roger and Denise joining us by car. As is usual we have to offer Phil a big “Thank You” for producing the tent and the barbeque from the tardis that is Kerry Anne which encouraged most people to stay up chatting and drinking until after their bedtime.

A high point of the weekend was the walking tour of Oxford arranged by Julia which saw most of the crews jump on the number X13 bus from Abingdon town centre and disembark in Oxford for a look around the fantastic Westgate shopping mall before meeting for the tour at 2 o’clock. The tour itself was led by a mature student who related a few interesting stories about the places we visited over the 2 hour duration of the walk and whilst it was advertised as a free tour, the guide suggested that we may want to tip him at the end if we had enjoyed it. I think he was happy as most of the 22 people in our group pushed a note into his hand as they left. 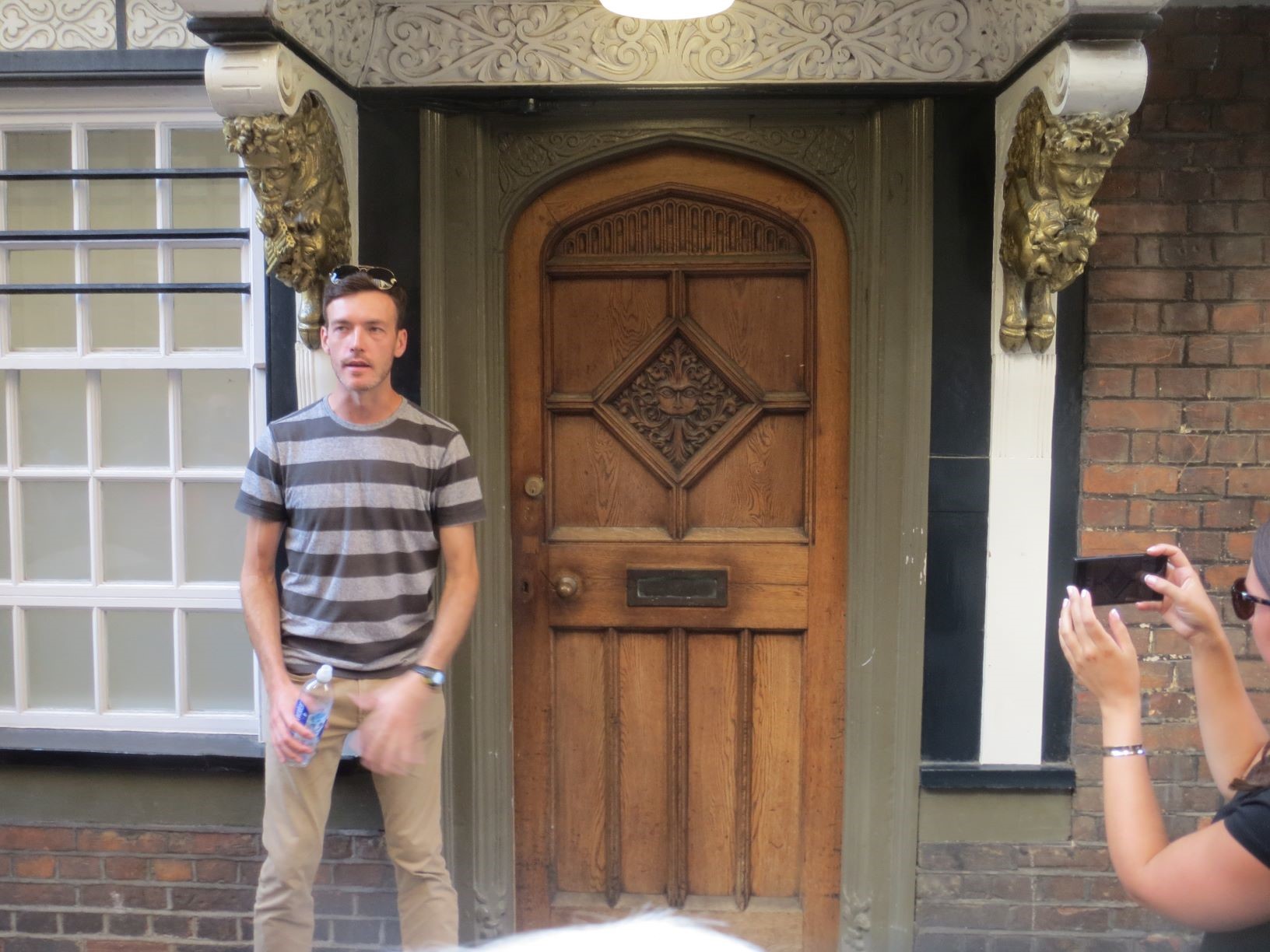 The walk concluded, we all retired to the garden of The Bear, reported to be the 2nd oldest pub in England, where a cold drink set us up for the return bus journey.

As fate would have it the Abingdon lock keeper got married on the Saturday and it was a small treat for us all to witness the lockie and his new wife arriving on an EA boat with flashing blue lights, into the lock where all the wedding guests were waiting suitably dressed ready to throw handfuls of confetti over the couple as they got out of the boat. 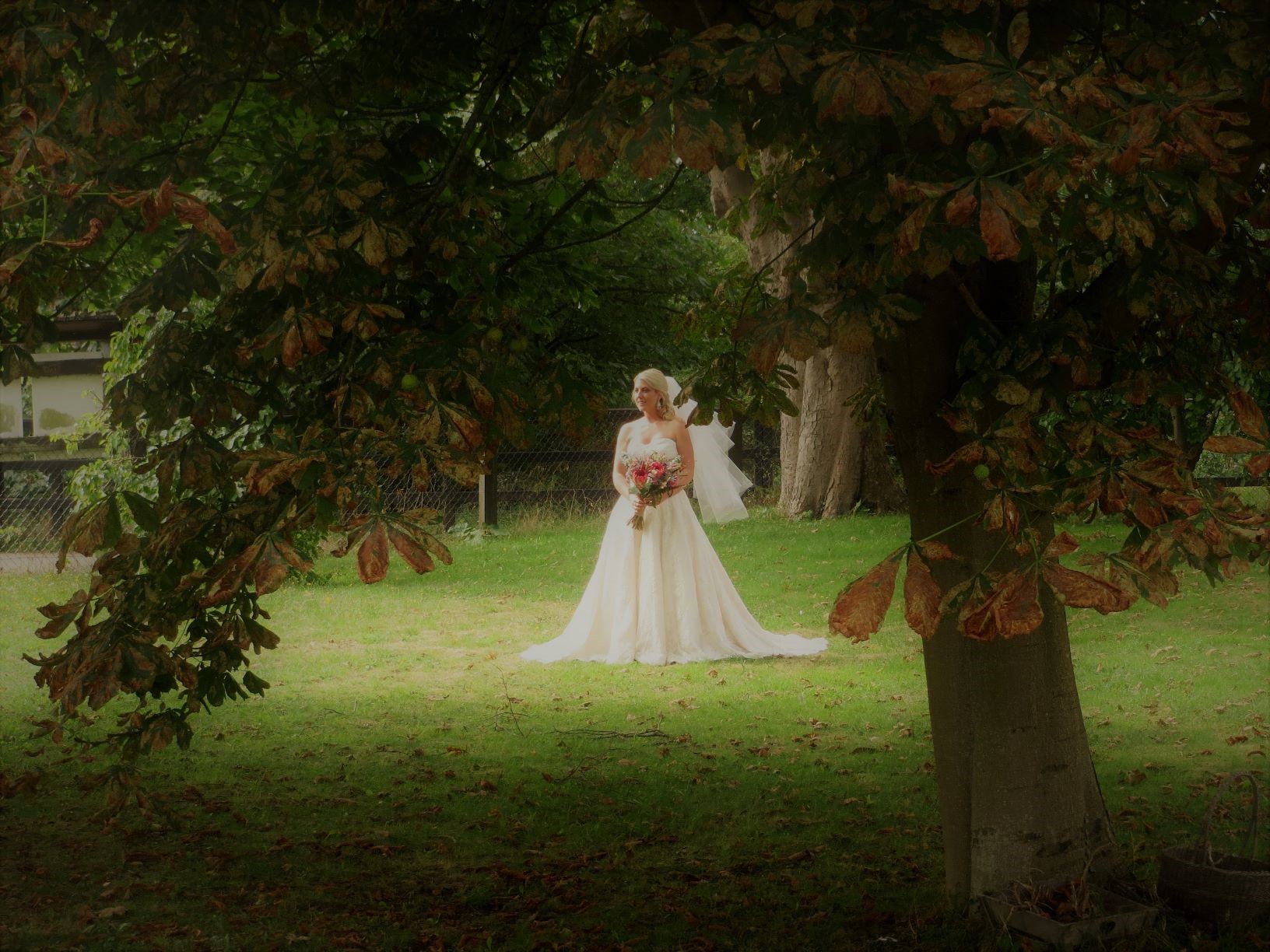 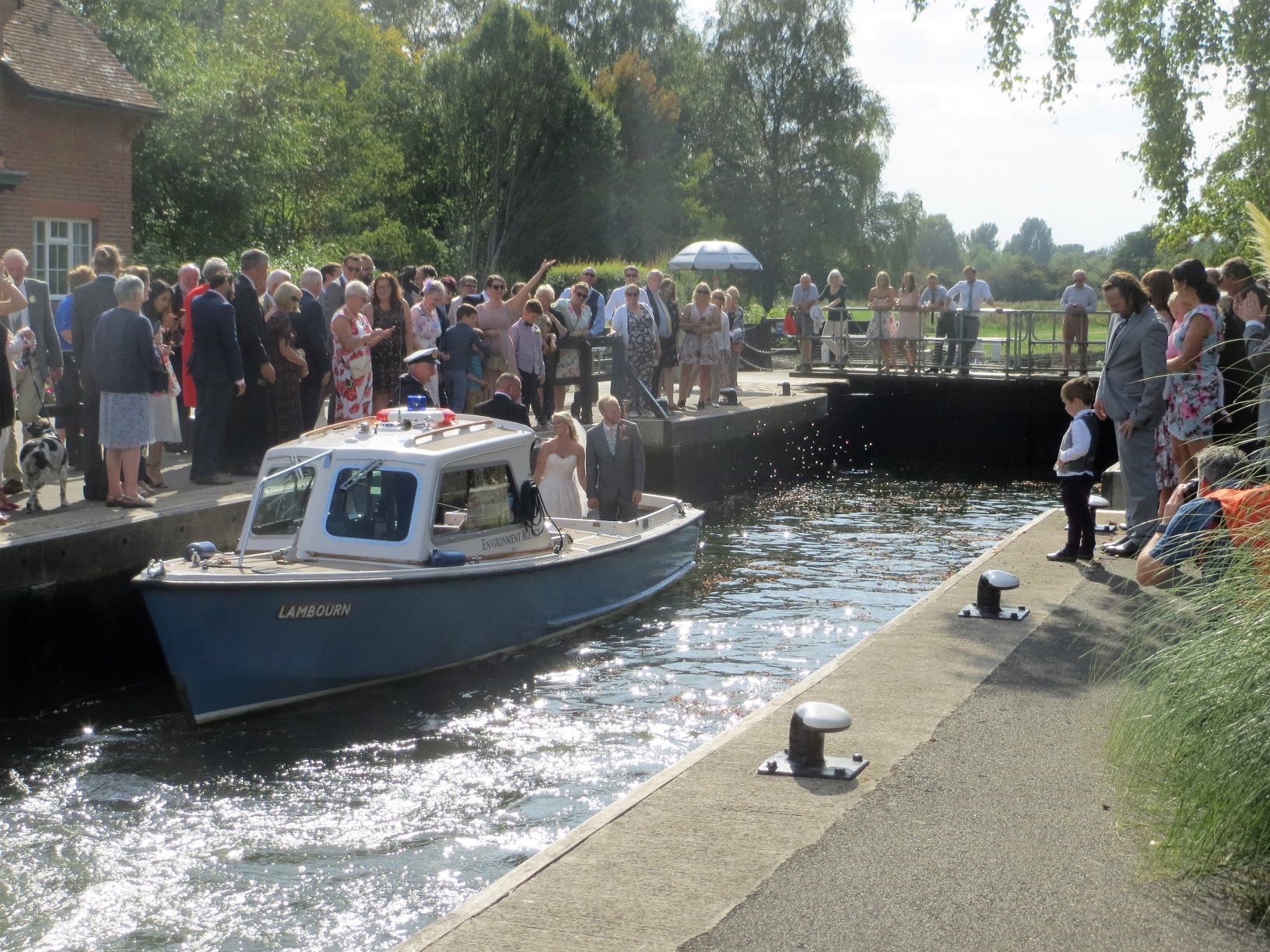 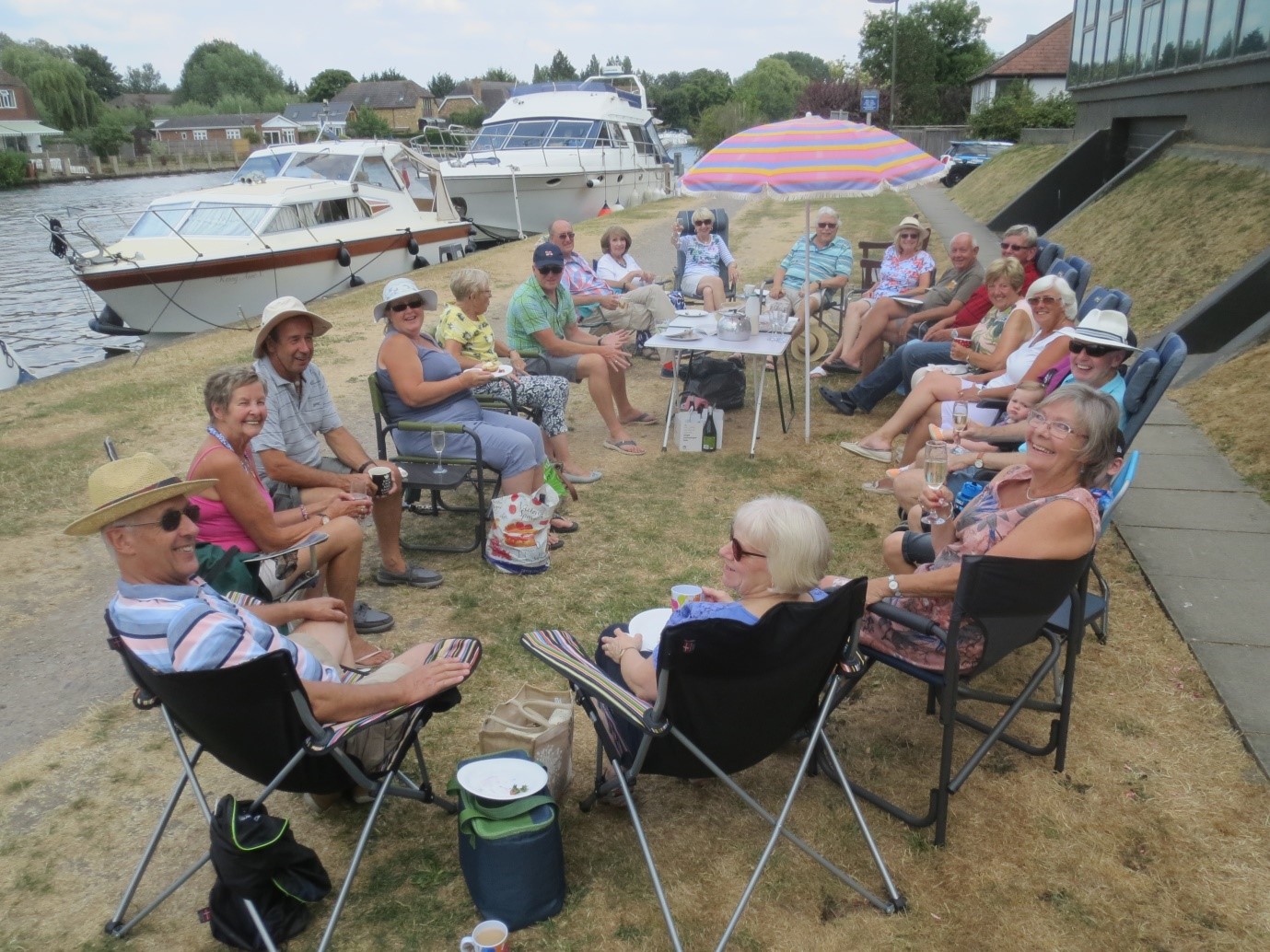 The weather we had for the Strawberry Cream Tea Cruise to Runnymede could not have been more different to last year's solid rainstorm which forced us to seek shelter on two of the boats. This year we were all wishing the clouds would come back but this time it was to protect us from the 30+ degrees and the burning sun. Despite the best efforts of Mr Grumpy who lived in one of the flats at the back of the building we managed to enjoy ourselves. 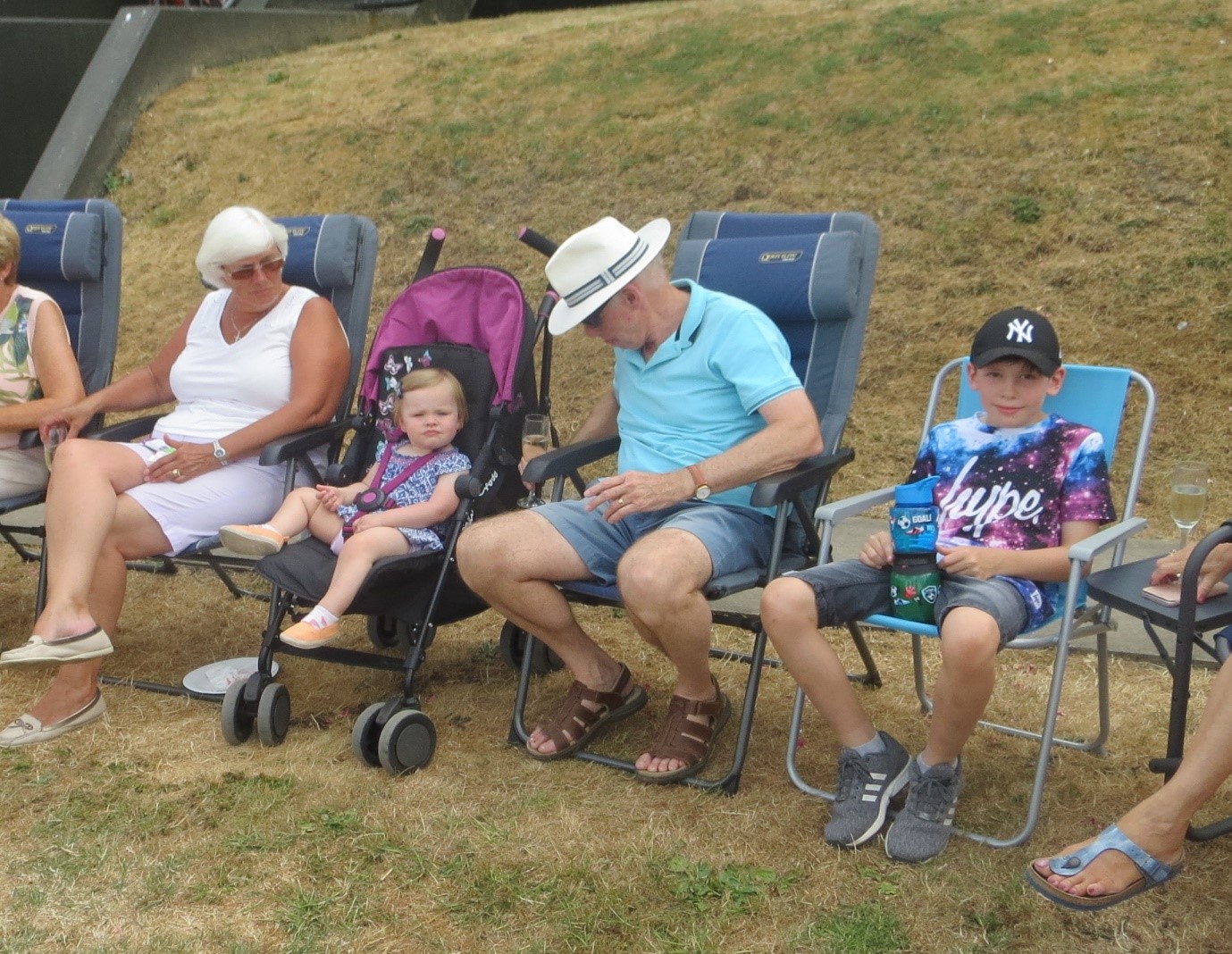 With the strawberries and cream being kept in the fridge until the last moment, Jean was able to lay out trays of fresh scones with cool cream and chilled strawbs which were appreciated by everyone. Hot tea and/or cold Prosecco complemented the scones. Seven boats made the trip with three other crews coming by car. Thanks to Jean for organising the refreshments, and to Dudley for providing the transport to collect the order for Fish‘n’Chips. 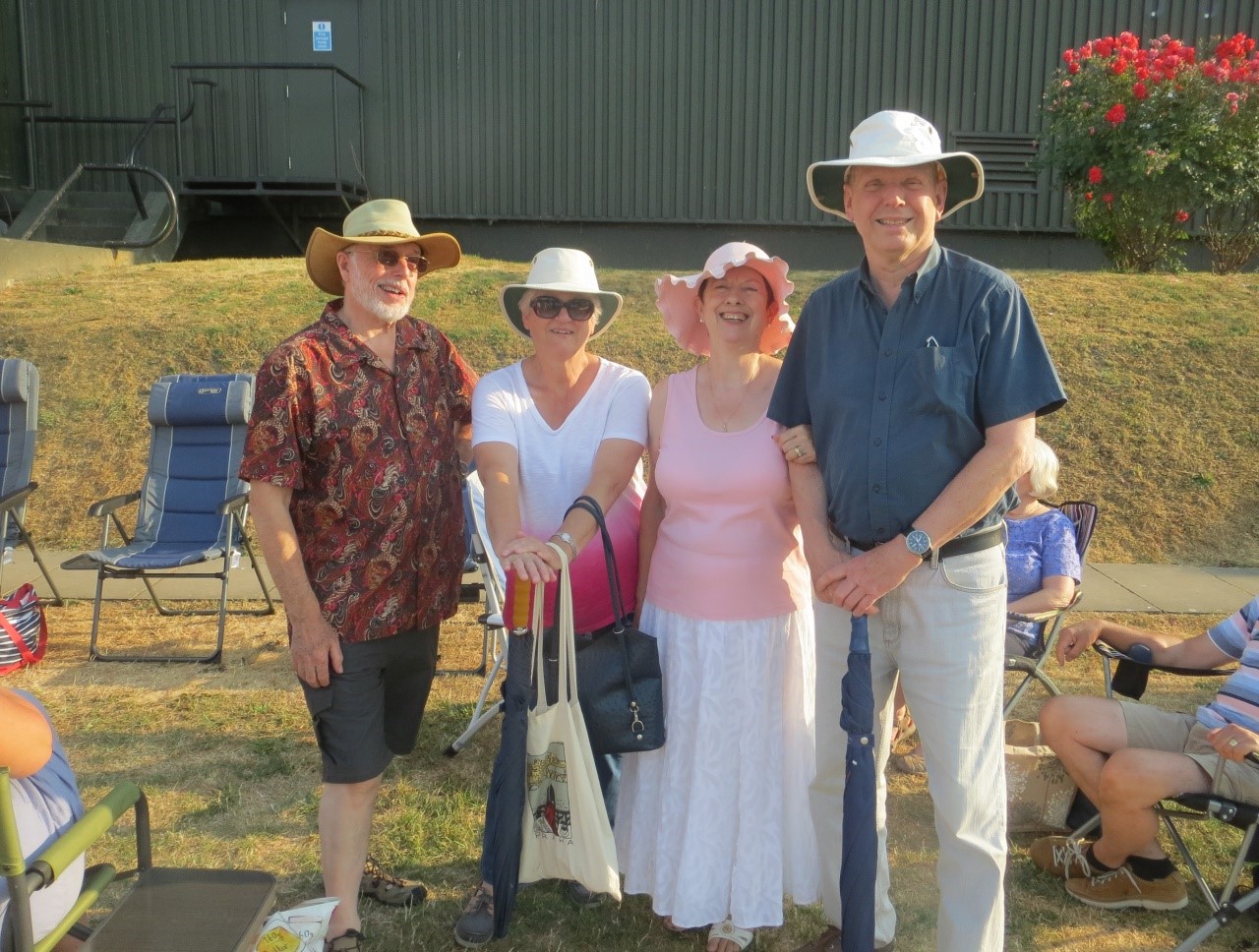 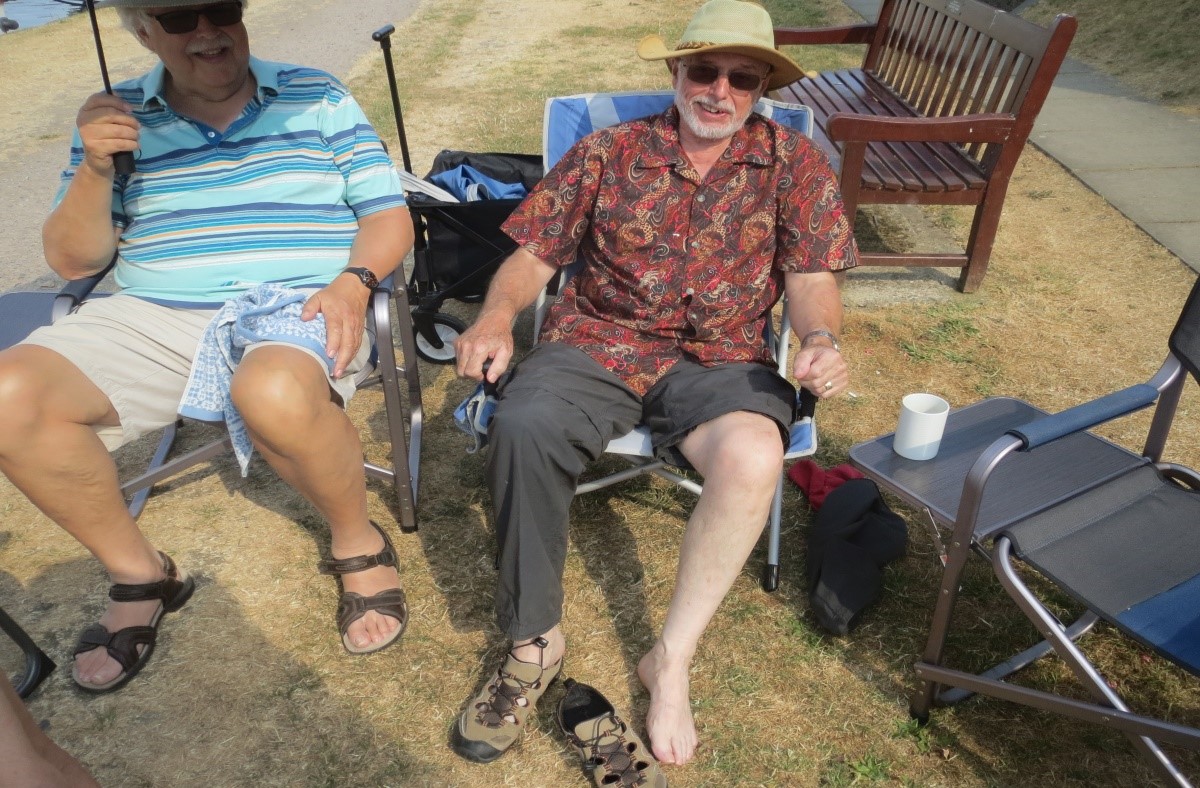