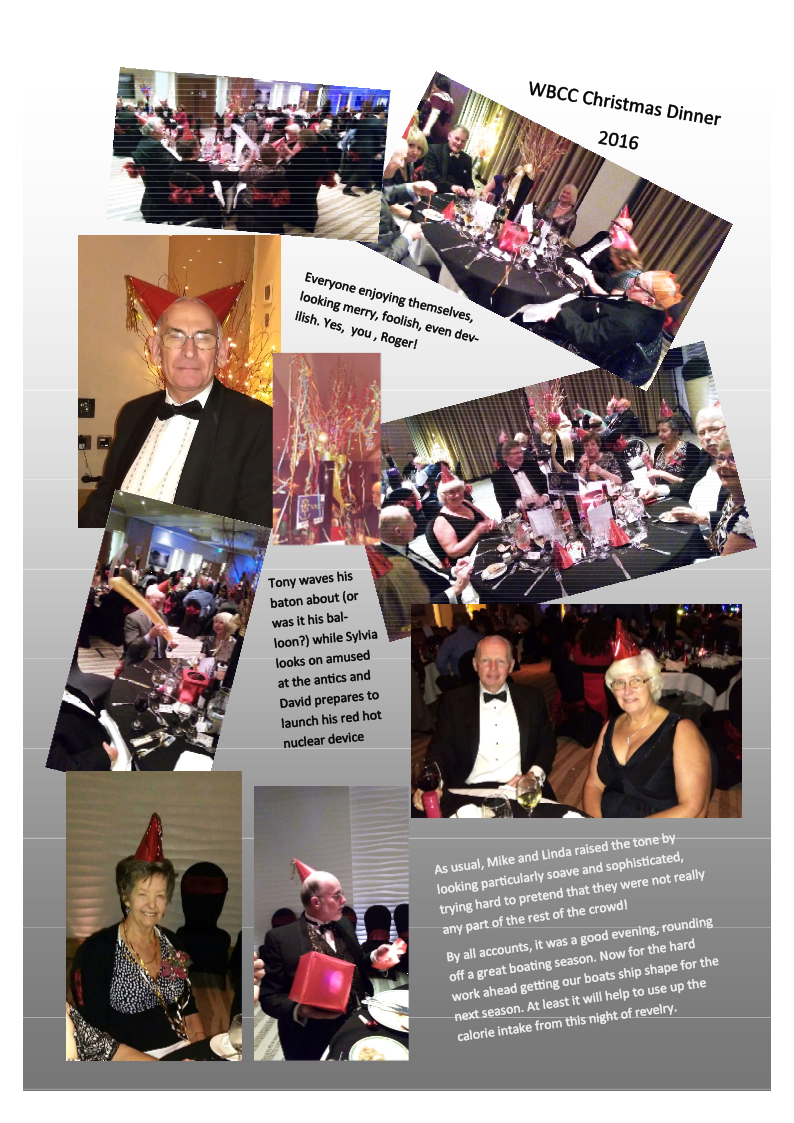 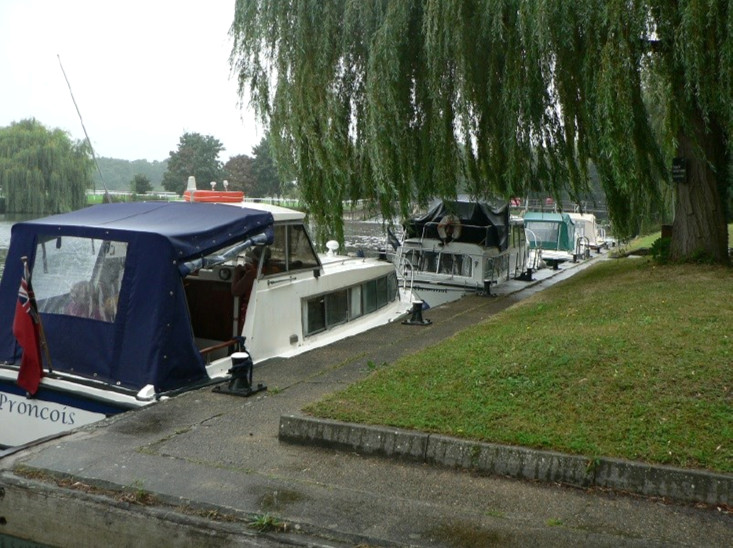 As you can see, while the boys put up the gazebo in the drizzle, the girls were having fun on Proncois. 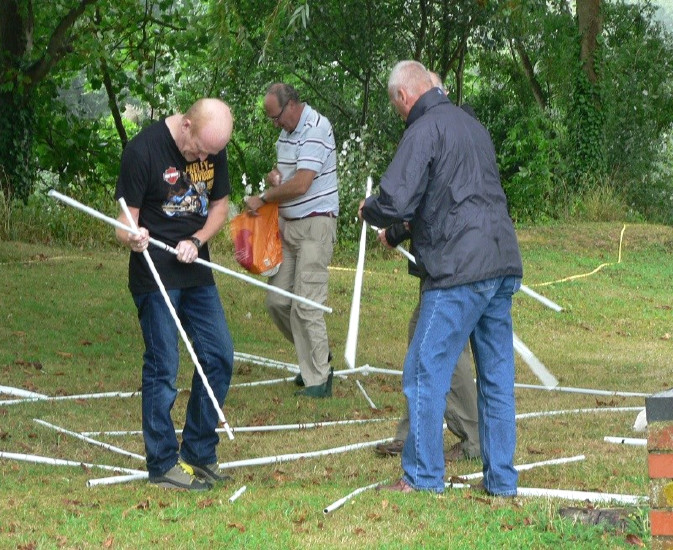 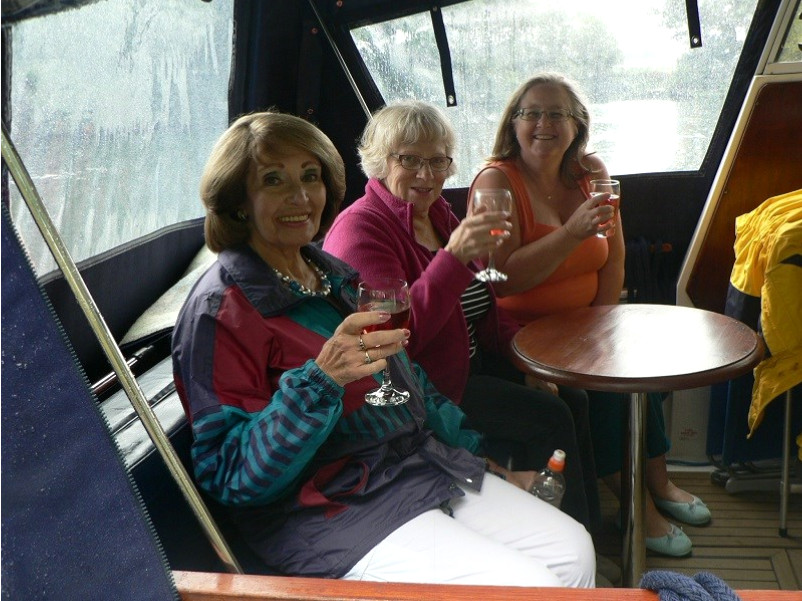 We had quite a bit of fun in the evening too with a BBQ and 'Last Night of the Proms' on Kay and Phil's tele in the tent.Phil certainly got into the spirit of things, as you can see from the photo. It might even be thought that some of the spirit went right to his head! 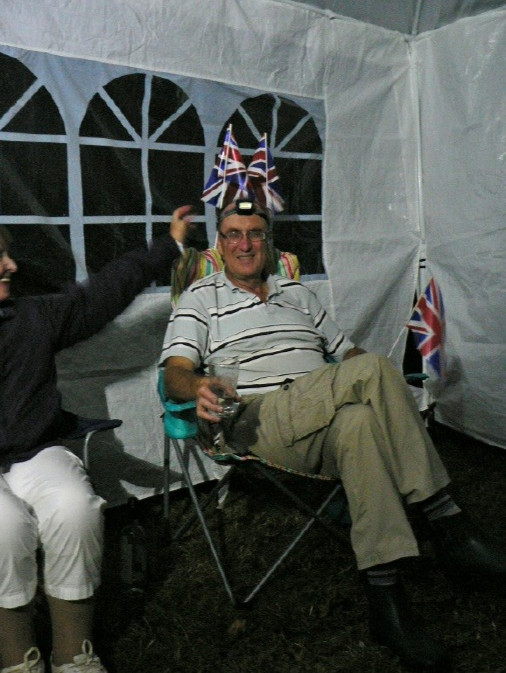 For those who don't know me and my missus Shirley, we are former Thames boaters and keen WBCC members. I even have a dim memory of being Commodore one year, but perhaps its best if a veil is drawn over that episode. Even though I don't greatly miss having a boat, I still love the Thames and particularly the tideway so when David Seager announced there was a wheeze whereby people could do a downriver trip without even having to have a boat I was so overcome with emotion that I signed up for it straight away. The wheeze was the 'Waverley', a paddle steamer dating from 1947, and the last sea going paddle steamer in the world. The trip was to last all day, from boarding at Tower Pier at 10 am and cruising down river, stopping at Gravesend and Southend Pier, visiting the Red Sand and Shivering Sand towers in the estuary and then returning to Tower Pier by 8:15 pm. However, we live in Nottingham so it was going to require a bit of clever planning to be able to participate.

This was an absolutely splendid trip, and many thanks are due to David Seager for organising it. Shirley and I really enjoyed the whole experience and it was lovely to see and pass the time with old friends and it was only just a little sad to think of quite a few WBCC members we have known who would also have loved to have done this trip but are no longer around. 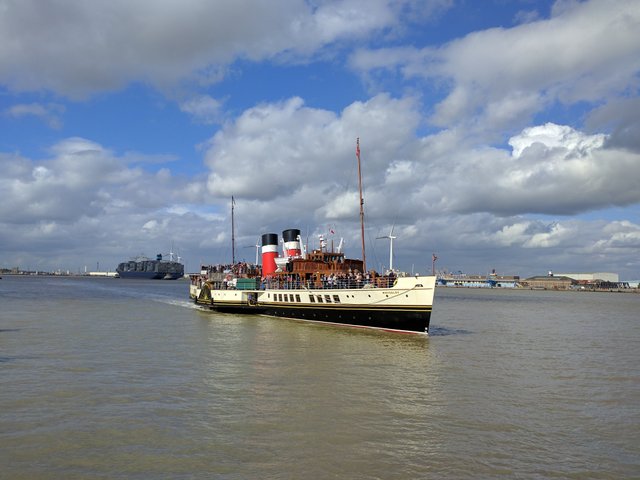 The boat left the quay and we proceeded through Tower Bridge, which luckily raised it's bascules just in time to avoid knocking down our chimneys. David told me on the 'phone that Ann Dibley, who had hoped to come over from France to join us, had unfortunately had to cancel her plans due to illness which was a great shame. I managed to locate Roger and Denise Harden and we had a mutual bringing-up-to-date session. Since neither of us wanted to risk losing their hard won viewing positions by both leaving together we had to do that in two stages. First Roger came over to our side of the boat for a chat and then Denise, and then we all settled down to enjoy the voyage. I believe Martin and Trish joined the boat at Tower Pier but we didn't see them until much later in the voyage.

The scenery around Tower Bridge is very different from what it was last time we went through in our own boat, with weird new buildings called Shard, Scoop, Onion, Walkie-Talkie, Gherkin, Can of Ham, Cheesegrater
and Stealth Bomber. But as we progress down stream things begin to look and smell more familiar. I believe I can detect the slight whiff of an old friend: 'Eau de Erith', where the aromatic efluvium of the Crossness and Longreach sewage works meet. Or perhaps 'Essence of Tilbury' with its subtle undertones of spice and coffee.

We stopped at Gravesend to swap some passengers and also to swap Pilots. It is compulsory for a boat like Waverley to have a Pilot on board all the time while on the Thames. I guess Thames Pilots must have a free pass from the Health and Safety mafia because he gaily leaped from boat to boat with a fine disregard for his well-being. Ann and Dudley Norman joined the boat here and so did David and June Seager but they were obviously discouraged by the crew from doing any leaping.

So on we go, and as we pass the Medway, we can see the masts of the Richard Montgomery sticking up out of the water. It all looked rather beautiful with a hazy sun dappling on the water and colourful container ships passing by. We celebrated with more tea and ate the chicken sandwiches. Next we stopped at Southend Pier for another swap of passengers. 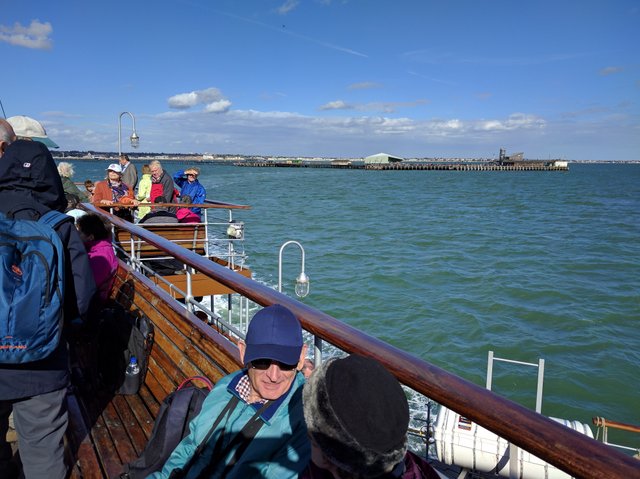 At some point I went down to the engine room and had a good long look at the massive shiny bare metal pistons and crankshafts driving the paddle
wheels. The smell of the hot oil was delightful. 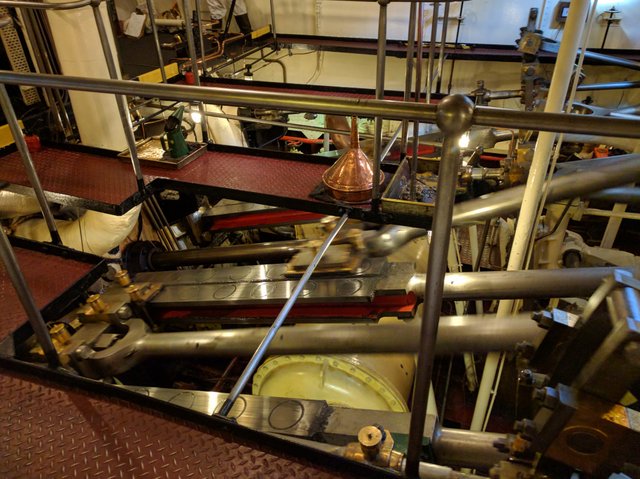 Then the Red Sand forts/gun platforms come into view and I am snapping away as fast as possible as we whizz past. Finally, we reach the far end of the cruise and circumnavigate the Shivering Sand forts and start heading back upstream. All the forts are looking very dilapidated and unloved. 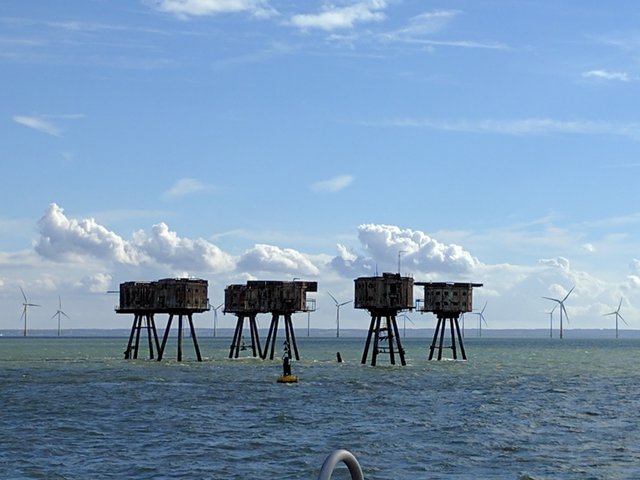 As it gradually got dark we all retired to the warmth of the tea room and in time honoured fashion thrashed out solutions to some of the worlds problems. Denise told us about the unlucky lady who had been left behind at the Tower. She had arrived just a few seconds after the gangway had been pulled up and despite her pleading and a tear or two they hardened their hearts and would not let her come on board.

We stopped at Southend Pier and Gravesend to swap all the passengers back again (and another Pilot) and eventually got back to Tower Pier an hour late at about 9:15 pm. A couple of crew members collected the tickets on the way off and I was most interested to see what they would do if someone didn't have a ticket, but I was disappointed; the one person I saw get off with no ticket just pointed vaguely behind them and said something like 'Bloggs has got my ticket'. Dead against the rules! But the crew member just said 'OK' and waved them past!

David Seager introduced us to a new game, Kubb. Originally thought to be a Viking game played with skulls and femurs, it has evolved into being played with stubby rectangular wooden pieces and heavy round dowel like pieces. 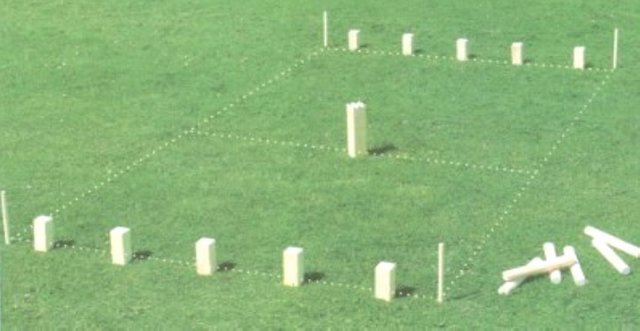 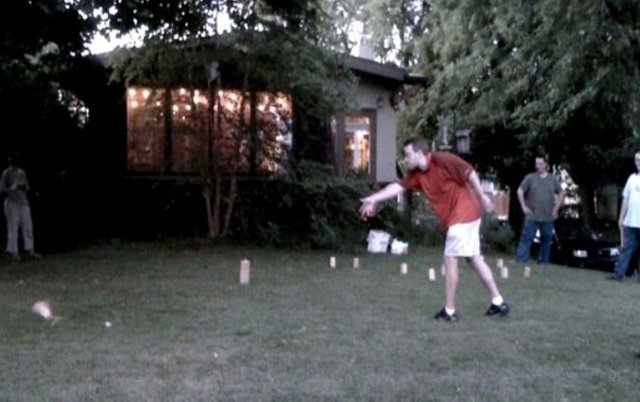 Play takes place on a small rectangular playing field, known as a 'pitch'. 'Kubbs' are placed at both ends of the pitch, and the 'king', a larger wooden block, is placed in the middle of the pitch. Some rules vary from country to country and from region to region, but the ul?mate object of the game is to knock over the 'kubbs' on the opposing side of the pitch, and then to knock over the 'king', before the opponent does.
Under David’s direc?on and guidance several people played but the most worthy compe?tor was Ben, a cheerful crew member from Rosette who joined in the fun with gusto.

Saturday night saw all of us deeply in thought attempting to answer the quizzes presented to us by Julia and Jim. Fortunately for most people—but mainly due to the good judgement of the Taylors, - they were not too difficult and most people got at least some of the answers right. Actually for a crowd of boating enthusiasts, this must have been because the quizzes were particularly easy, but we are not admitting to that.

Ben came round with marshmallows for us to toast on the BBQ which had been brought inside by the late evening and we were very impressed with his generosity and thoughtfulness. Thank you Ben. At least one member WBCC is now addicted to them! Two ladies who had been moored in the upstream pool next to a particularly noisy boat joined us at our invitation on the Sunday night BBQ, after we had offered them a vacant mooring.

As is usual, there was an abundance of food on BIG Breakfast BBQ, and second helpings were there to be had for those who were prepared to get down on their knees and beg for a crumb! 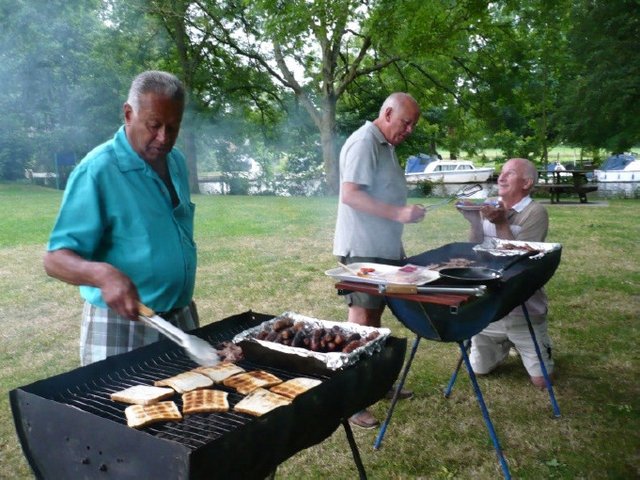 Kay’s Tea on Sunday proved to be popular although some people preferred to give it a skip, having participated in Big Breakfast and a big lunch at the Rising Sun.

On arrival at the weekend every boat crew was presented with a choice of a plain or chocolate Swiss and asked to sculpt it into whatever one chose. Several people aimed to make it disappear (by eating it) but this was deemed to be unacceptable behaviour.

WBCC inventiveness came to the fore as usual judging by the wide variety of entries. David Seager decided to put the judging into the hands of the populis through a show of hands. In a closely fought competition, the winning entrant was Dinghies on the River entered by the crew of Born Free. 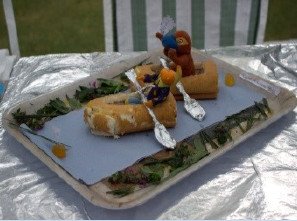 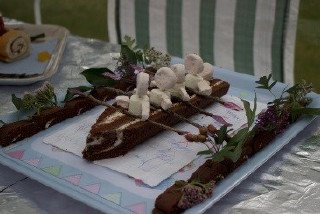 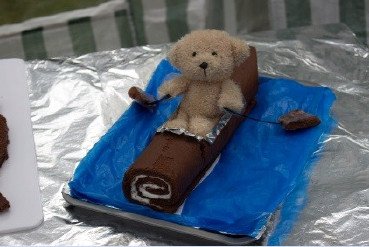 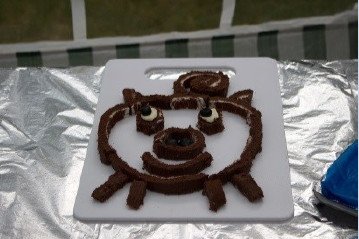 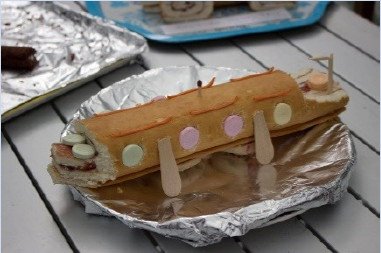 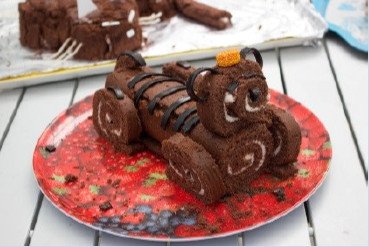 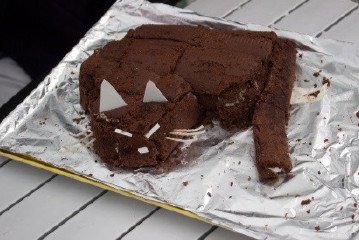 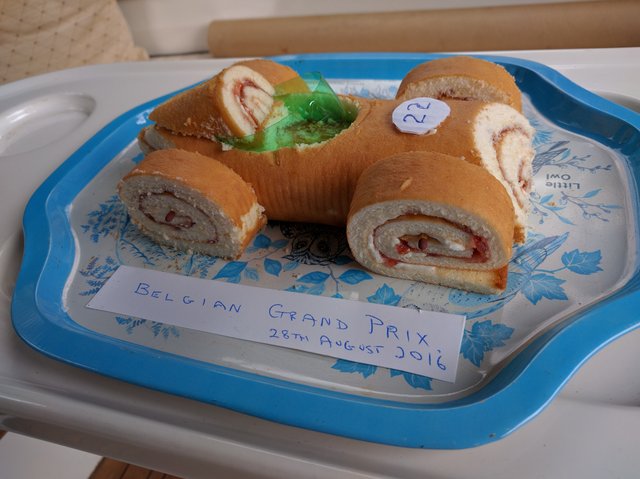 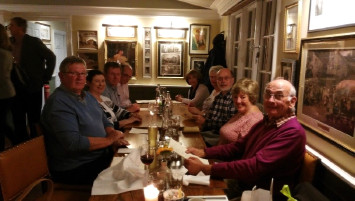