The annual week away started on Friday 5th June.  First over night was at Windsor with three boats present and a meal out that evening.

Next day at Cookham many more boats arrived, particularly those from Bray.  The line up was nine boats, seven on the week away, Kerry Anne V, Ma Folie, Chimerique, Miss Pud'n, Pastiche, Malbec, Pieces of
Eight, plus two out for the week end, Got it, and Sparky's Dream.

Unfortunately Born Free had only got as far as Citroen on the Friday before engine problems caused him to turn back.

Its was a bit blowy but with extra ropes to hold down the marquee tea was taken at 4 o'clock and later the club barbecue was fired up. 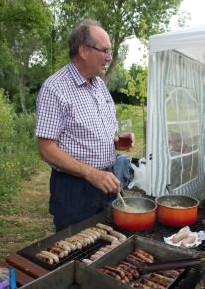 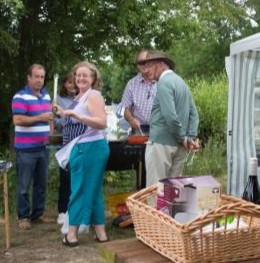 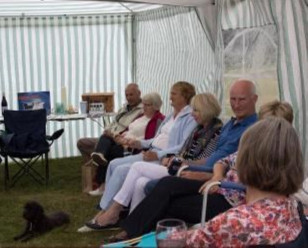 Most ate on board that evening.  Those who went out discovered that most restaurants in Henley are closed on a Sunday evening but good old Weatherspoons was open and still serving roast dinners.

Monday we moved up to Pangbourne, we all got bankside moorings!  Our numbers were boosted from six to seven by the late arrival of Prime Time who ended up on the out side of Kerry Anne V.  They had done the twelve locks in one trip!  Most ate on board that evening, I sampled a cod and chips take away and Chimerique went Oriental!

Tuesday's moorings were at the Upper Thames Motor Yacht Club at Sonning.  Malbec & Pieces of Eight stayed at Pangbourne so numbers were down to five.  We made use of the facilities to recharge our batteries and water tanks, and empty the un-mentionables.  We utilised one of the UTMYC barbecues to cook our evening meals.

On Wednesday we moved down to Henley where we were joined by Rosette, Miss Pud'n and the Pangbourne two.  The original intention was to eat out, but most elected to eat on board because restaurants had been arranged for the following two days.

On Thursday plans changed, the weather was very good, and with nine boats in the flotilla it was felt that Cookham and a barbecue was a better idea than the original Bourne End Royal Oak plan.

On Friday Bray Marina and an evening meal at the Fifield Inn arranged by Mike O'Brien saw a large turn out, with Lisa & Graham and Karen & Paul adding to the numbers.

On Saturday morning both marquees were set up in the grounds of the marina ready for the afternoon Hot Dog Barbecue and Lisa & Kay went off to buy the food.  Festivities began at 4 o'clock and at 5:45 we all trooped round to the river front to watch the Gloriana and the Magna Carta flotilla pass by. 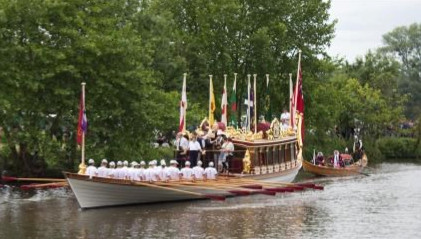